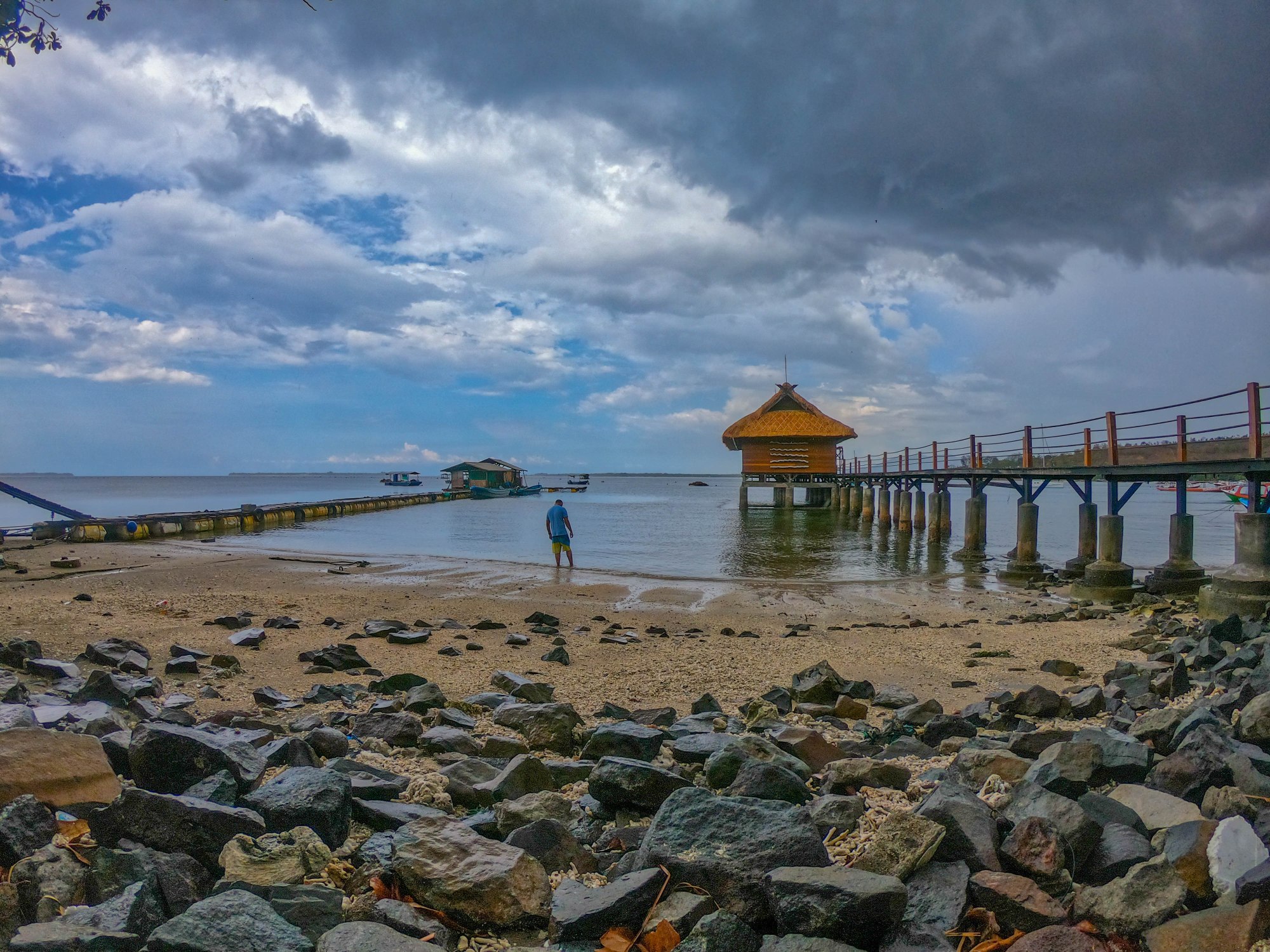 Lombok – an island in the West Nusa Tenggara province of Indonesia, 2 hour by flight from Jakarta. It is inevitably compared to its famous next door neighbor Bali, although major cultural, physical and religious differences exist. Lombok is far less known and visited. Unfortunately this year it has been hit by multiple earthquakes, reducing the tourist traffic to almost nil. The Indonesian archipelago is known for its frequent earthquake activity, as it sits on the Ring of Fire, a where earthquakes and volcanic eruptions are rife.

However this did not deter us from choosing it as our travel destination, after all forces of nature are omnipresent.

Internet had a plethora of information about Lombok and it confused us to no end. Hence we decided to book only the first 3 days of our stay in Senggigi and plan the rest of the trip impromptu on a day to day basis suiting our whims and fancies.

By the time we landed and collected our bags it was dark, we checked into D’MAX Hotel in Praya, 20 mins from airport. We had a tasty meal of Mi goreng and hit the bed.

We hired a car and drove to Senggigi where we had booked a stay for 3 days at Living Asia.

Clearly there were no tourists in Lombok as a result of the recent earthquakes and many buildings were still being refurbished. After checking into the hotel we did a bit of exploring on Jalan Raya Senggigi. This road has mountains on one side and beaches on the other- such a dreamy setting. It’s worth mentioning that the main roads in all of Indonesia are in very good shape, something which we may not find in India always. Along the way we found plenty of empty shacks which must have been habited by locals serving Satay as is common in the country. After driving past a few beaches (all of them with no being in sight) we found one which had a longer stretch of sand, this was Pantai Pandanan. 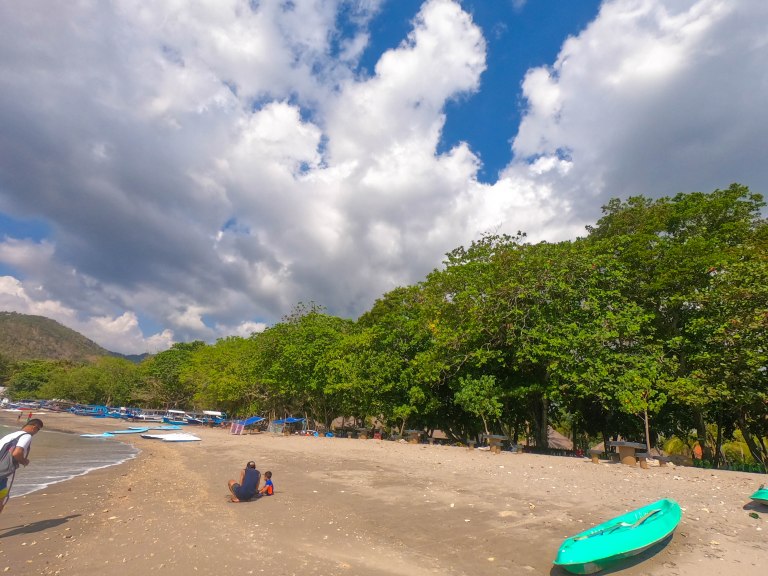 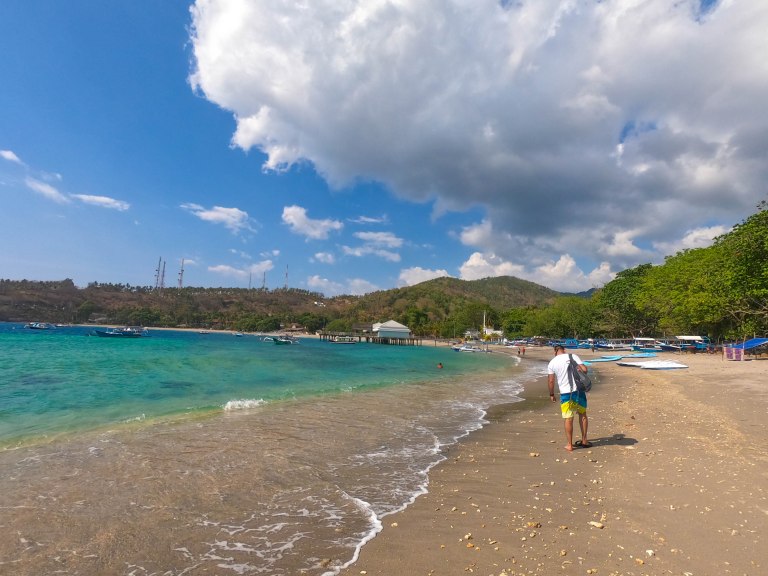 On our way back to the hotel we stopped at a sunset point. It was a Sunday and lots of local particularly young girls and boys seemed to be there. What a lovely day it had been,  couldn’t wait to explore more. 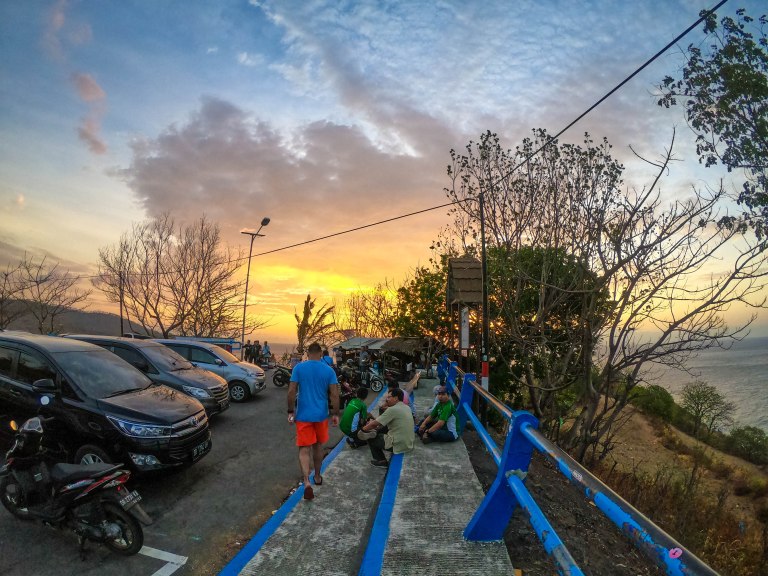 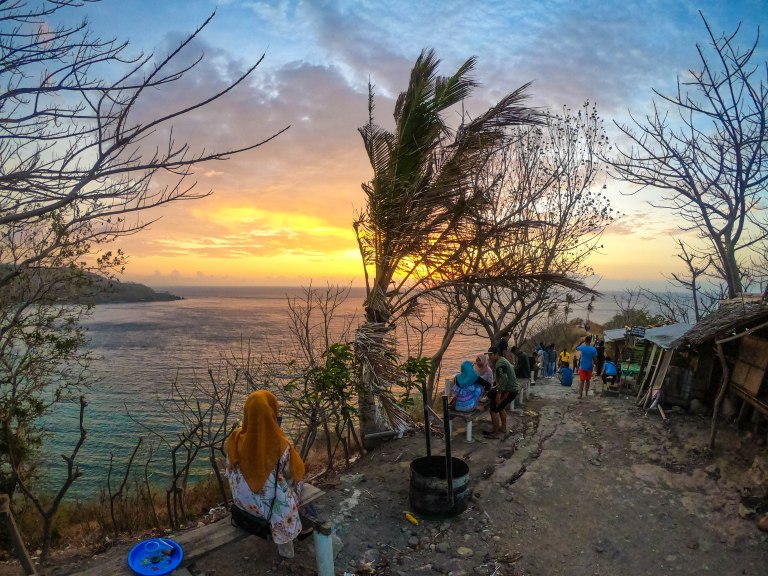 We had booked a snorkeling trip with the hotel via Scuba Froggy. This boat trip included snorkeling equipment, guide, lunch and water, coffee/tea, 3 different spots for snorkeling. The three Gili islands- Gili Trwangan, Gili Air and Gili Meno are quite popular with tourists from Bali. This is as far as the party/ honeymoon crowds come near Lombok. As soon as we reached our first spot at Gili Trawangan we saw a turtle which was pretty early as per our guide, he said its not everyday that people get lucky so quickly. The coral wasn’t great around this area, also affected by the 100’s of tremors that shook the island. Also I wasn’t impressed by any of the Gili islands as they seemed more for mainstream tourism.

There was an underwater sculpture, which was created by Jason deCaires Taylor, a well-known underwater sculptor. It was placed at a swimming distance from Gili Meno beach. This sculpture will eventually become a home for corals. We found some fish in the area. 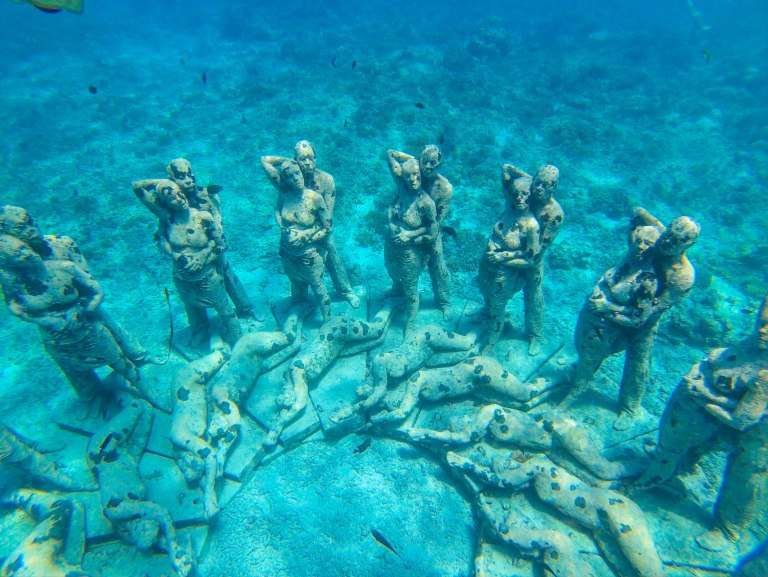 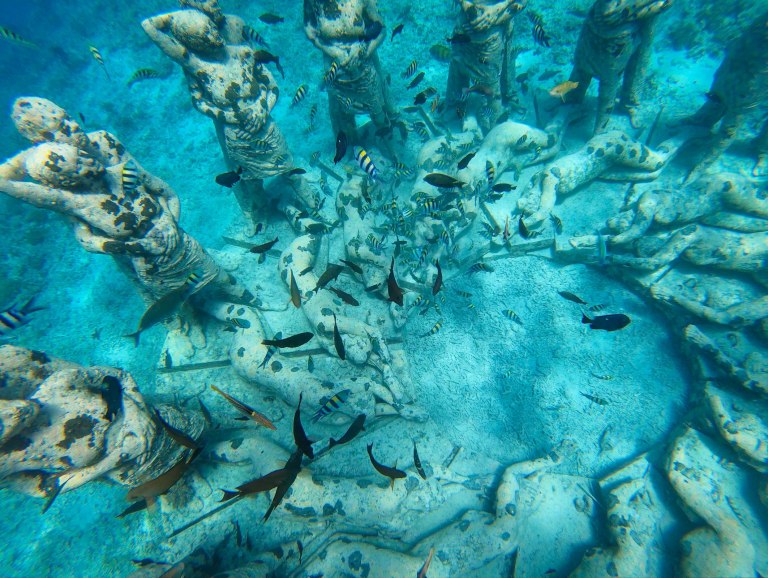 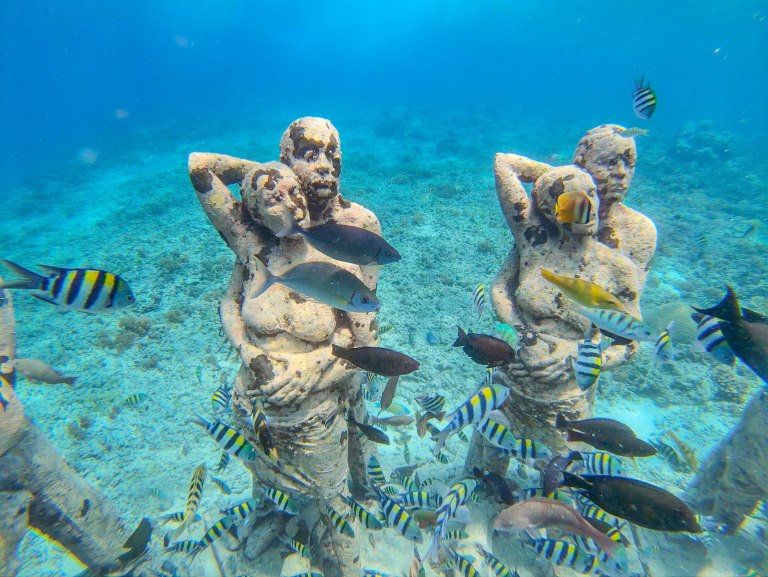 When most people think of Gili islands they probably think of the 3 famous ones – Trawangan, Meno and Air. But did you know there are more Gili islands – the lesser known islands off the south west coast of Lombok.

We drove 2 hours from Senggigi towards West Sekotong which harboured various fishermen boats. One such boat took us snorkeling, 15 minutes away from the coast, towards the “other Gili islands” (Gili Nanggu, Gili Layar, Gili Rengit, Gili Kedis, Gili Sudak) which register no more than a blip on the surface area of the earth. Only a few travelers venture out to these islands, and for us these islands were one of the highlights of our trip. There Gili islands are so quiet, almost nothing is happening there, we met a few locals only.

The sheer beauty of the corals we found here is what we have seen in Maldives only so far. Fish were varied and plenty. Also, whoever is looking for Nemo, please tell them he lives in Lombok waters..!! 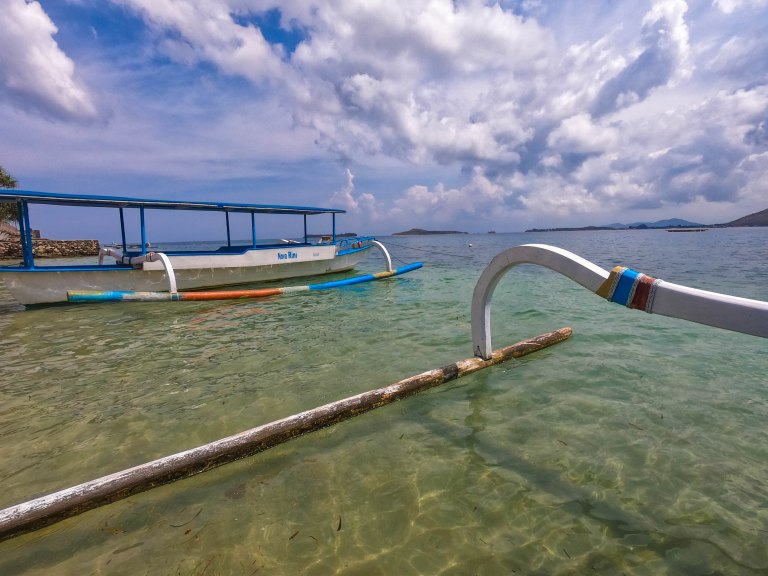 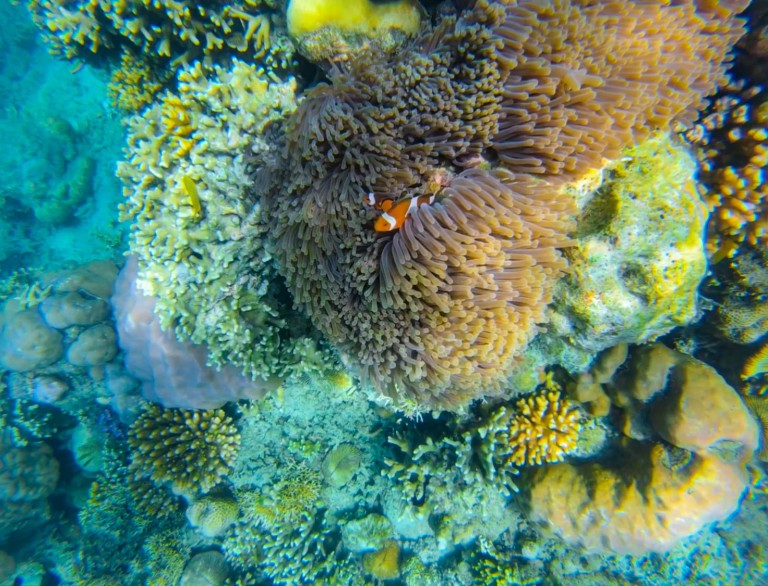 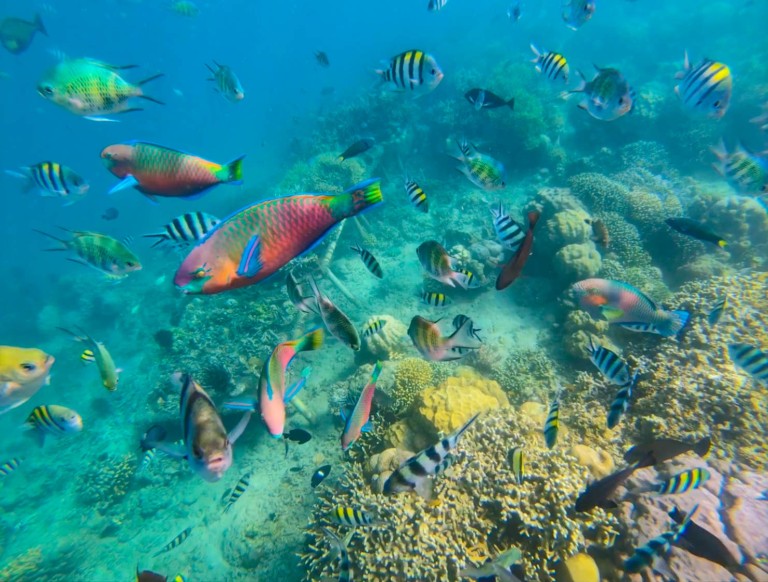 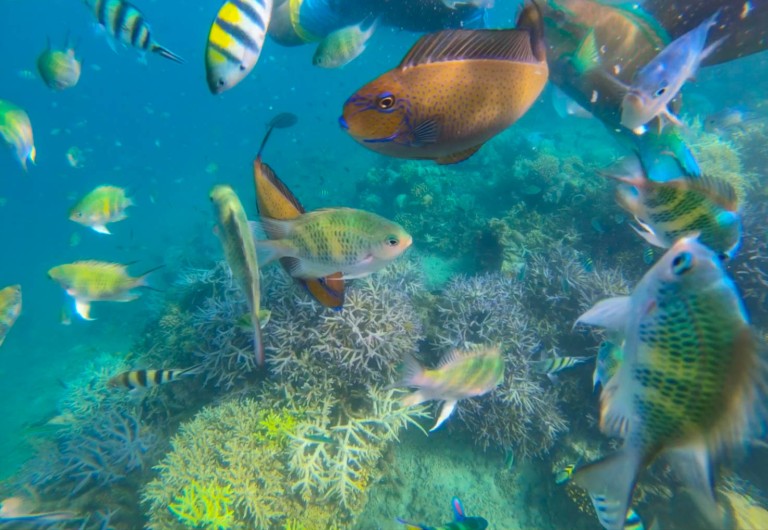 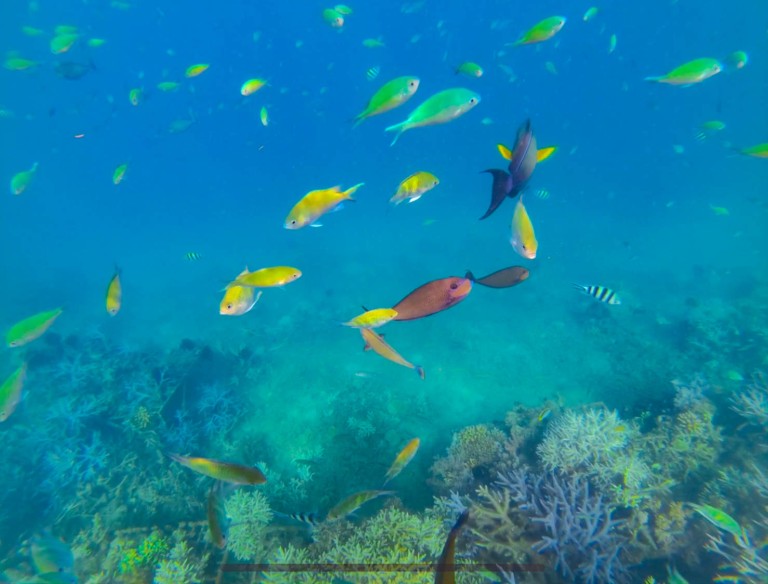 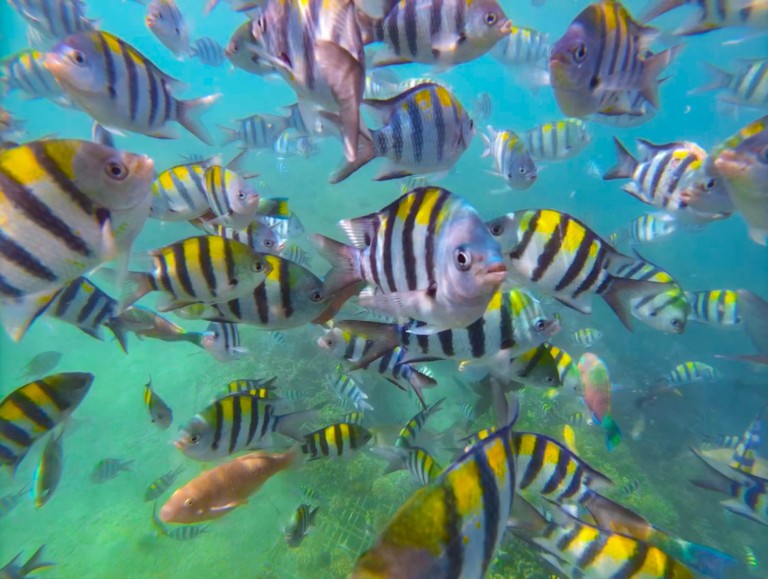 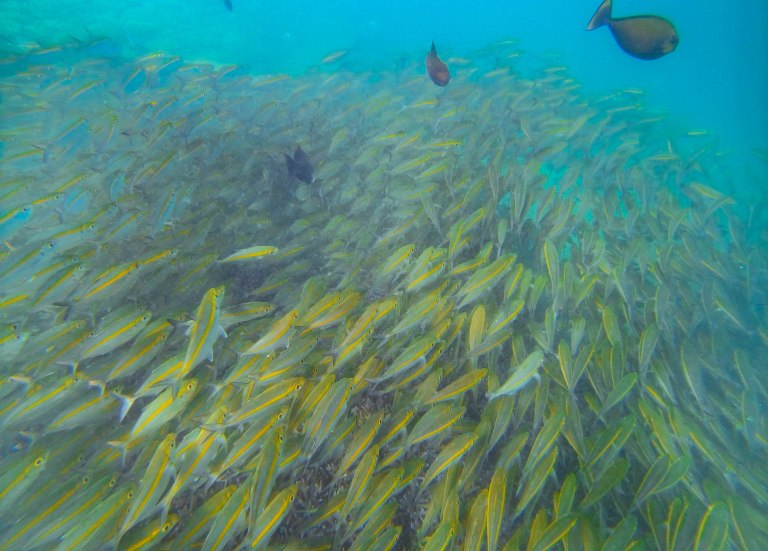 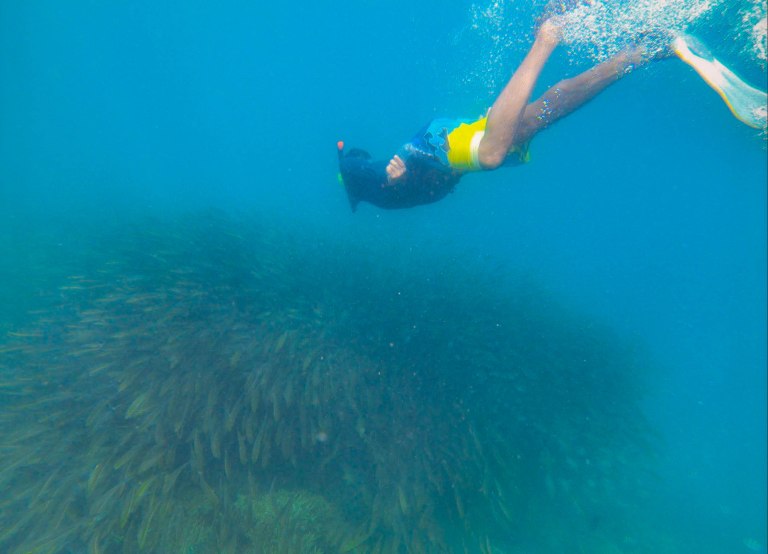 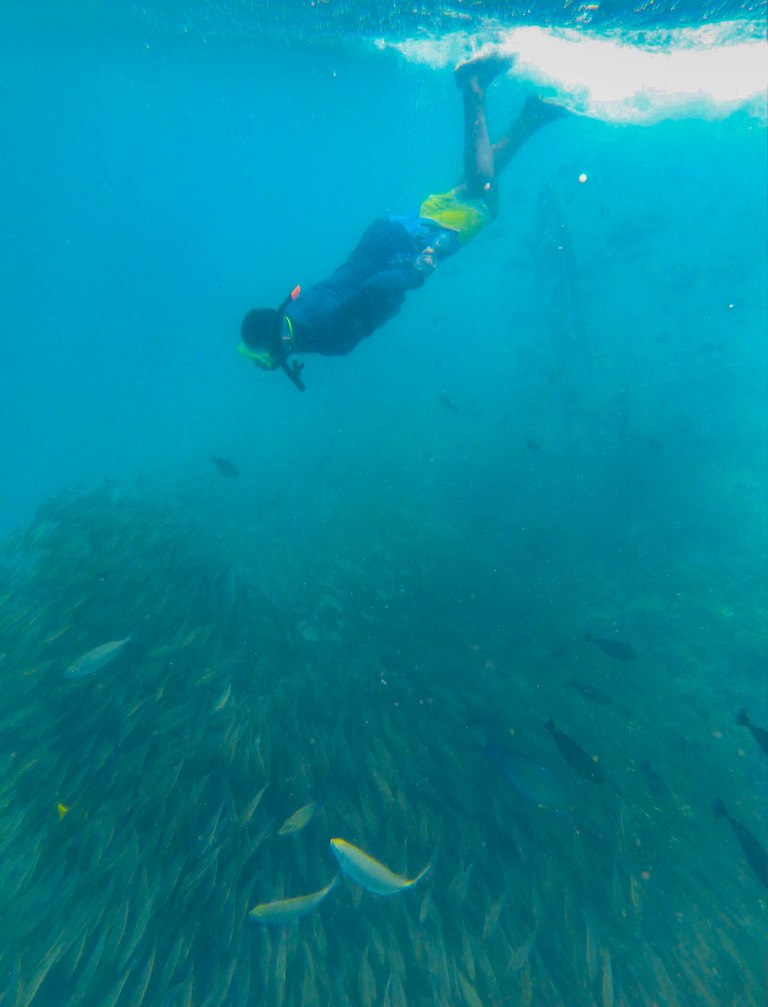 After a few hours of non stop snorkeling our next stop was Gili Sudak island – or the lunch island which basically has a couple of warungs. Its worth mentioning this was the best meal I had in the entire trip, the food was prepared by our guide back in Senggigi in his restaurant and we got the fresh grilled fish and young coconut from the warung at Gili Sudak. Food was delicious, complemented by amazing views. 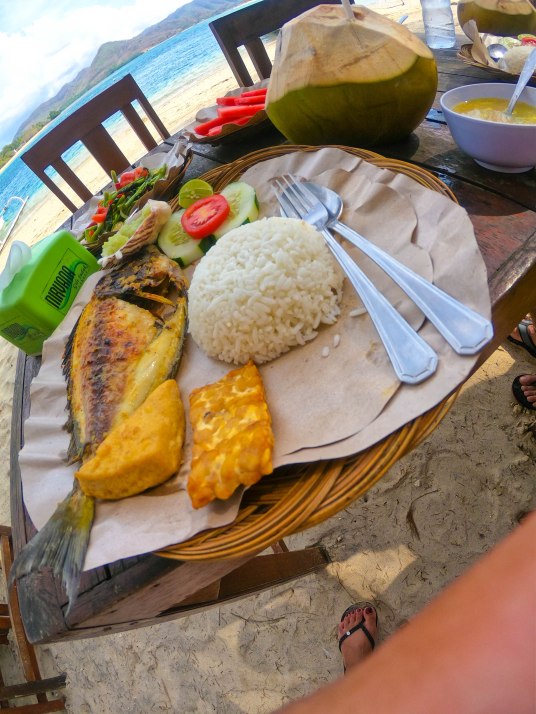 That was all for the day and we went back to Senggigi which was a 2 hour ride.

Day 4 – Out and about Senggigi

The plan for today was “no plan”. Since we had been active past few days. We just wanted to lounge around and soak into the surroundings and pretty much do nothing. First we wanted to try out another local warring for brunch by the sea. Couldn’t get enough of the seafood. 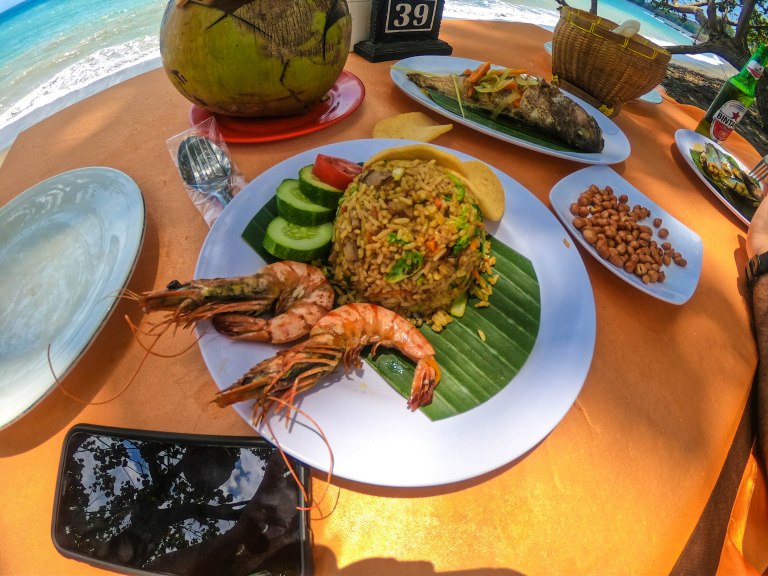 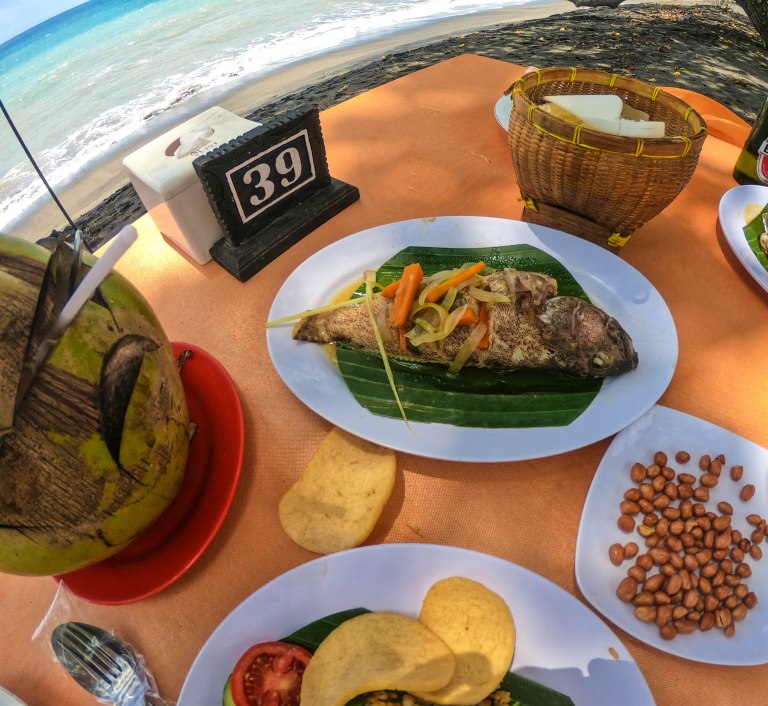 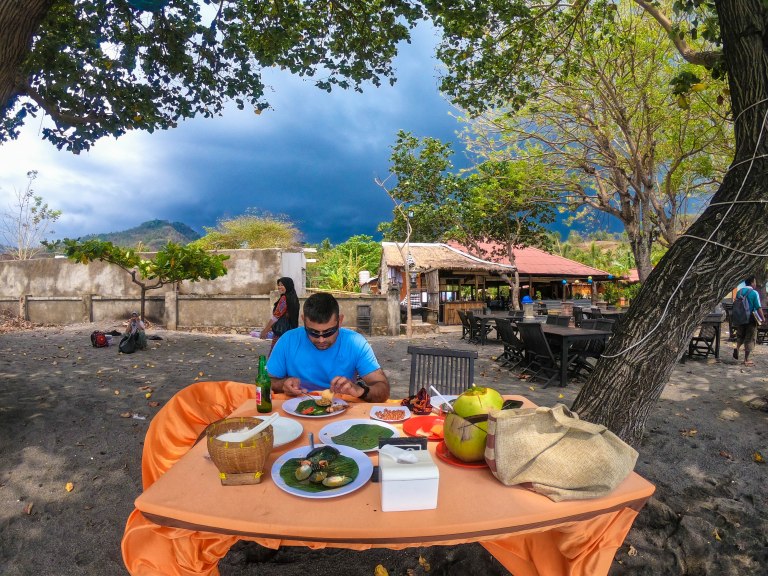 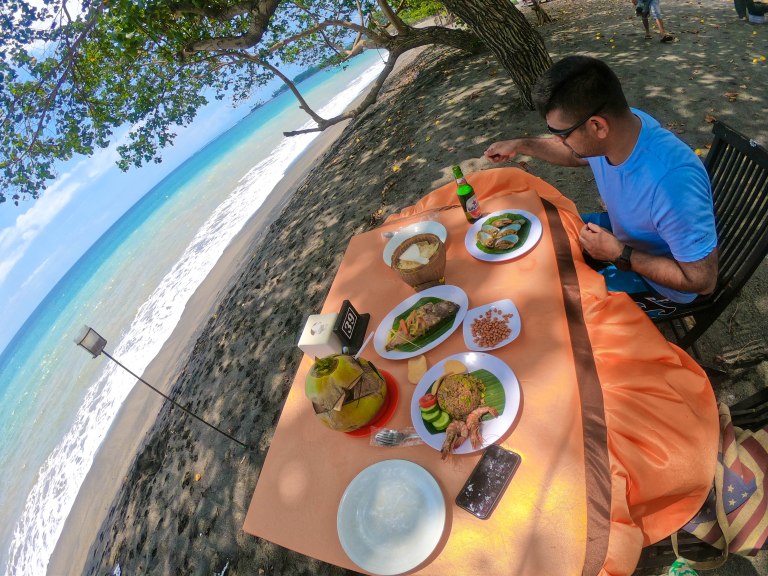 Later we went to an oyster farm- Autore Pearl Farm. The farm showroom was under construction as it underwent damage due to the earthquake. Also it was raining so the oysters couldn’t be prepared for the demonstration.

The staff at the oyster farm explained the entire process beautifully and we were glad we visited. The details of the farm I will leave for another post because there is a lot which goes on in that farm.

Finally in the evening we strolled around the art market. I love all things colorful, makes it even more beautiful with sunset in the backdrop. 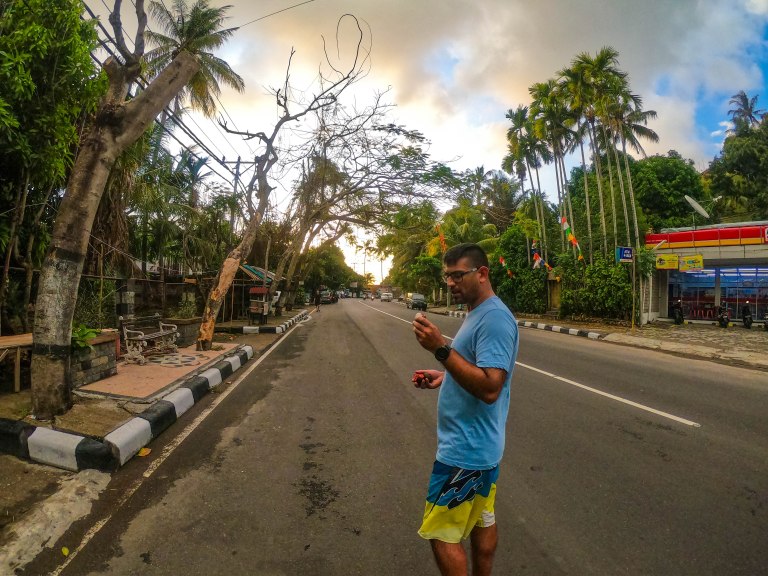 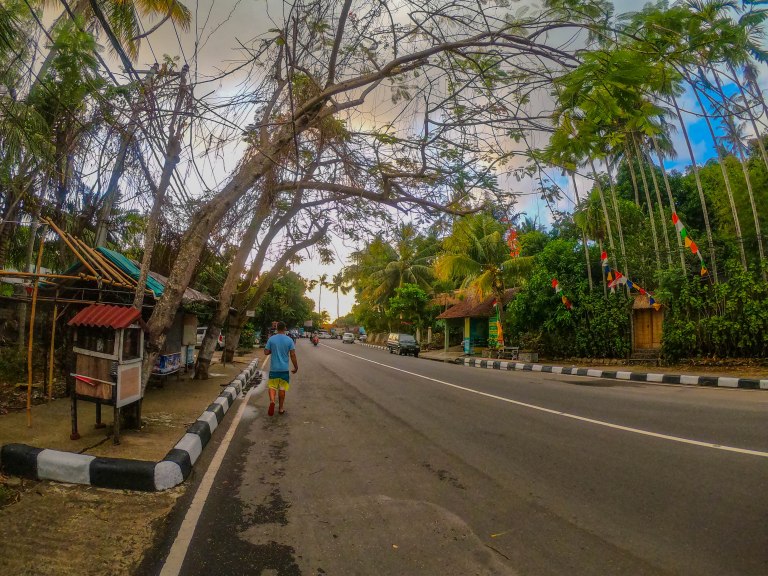 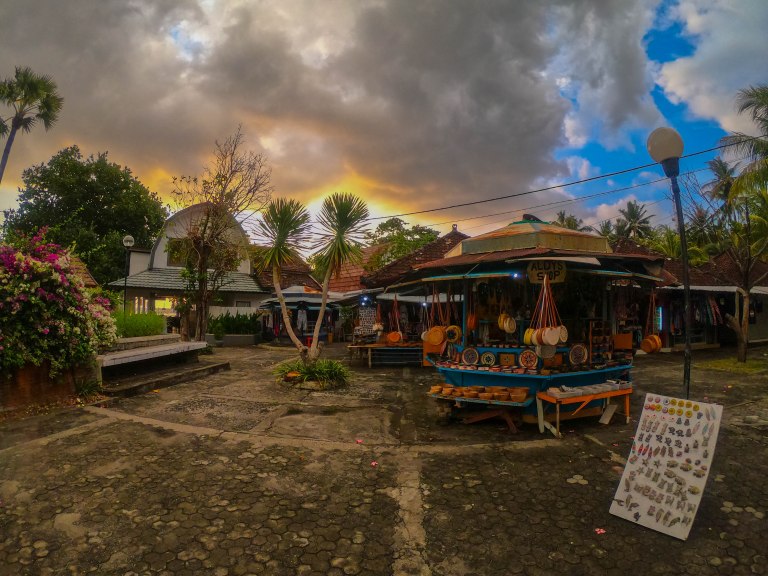 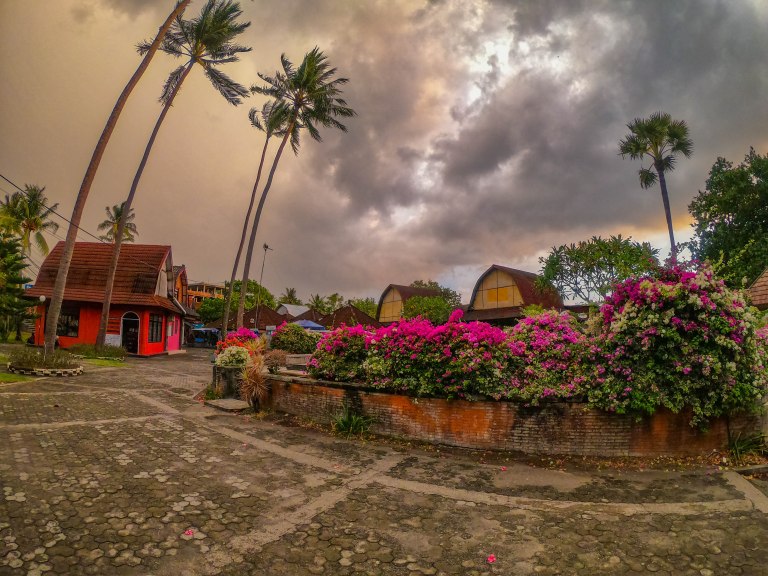 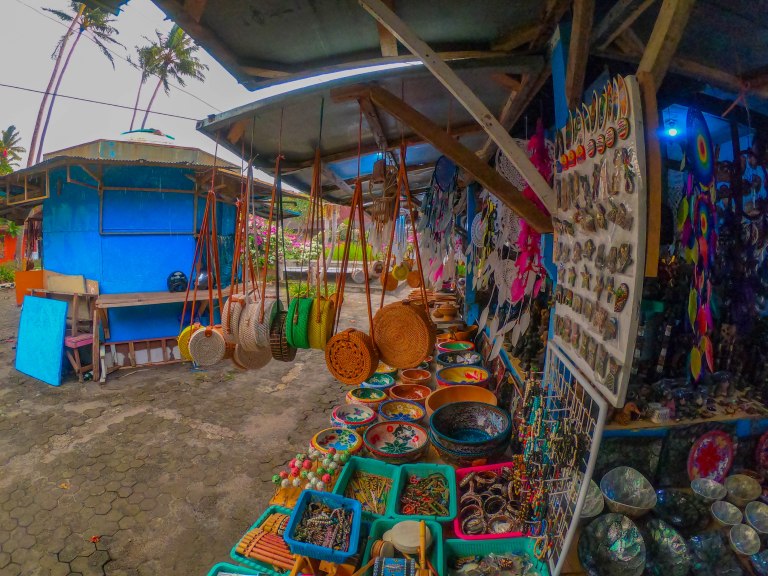 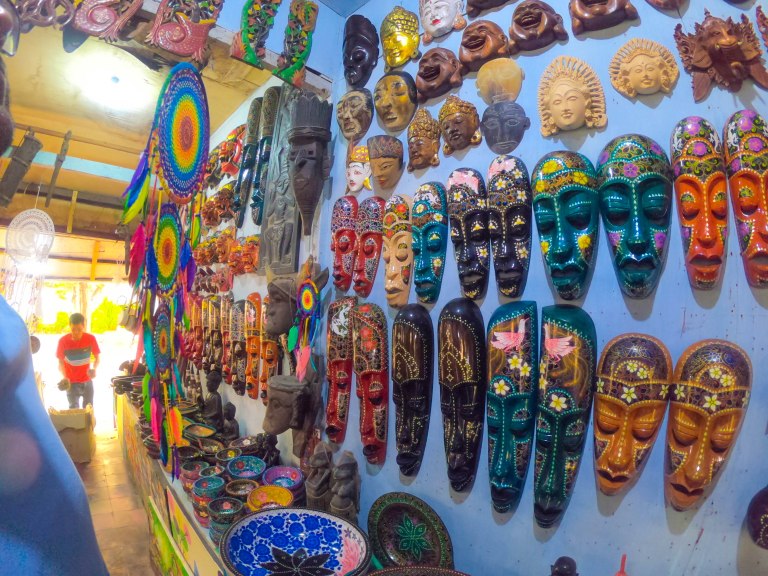 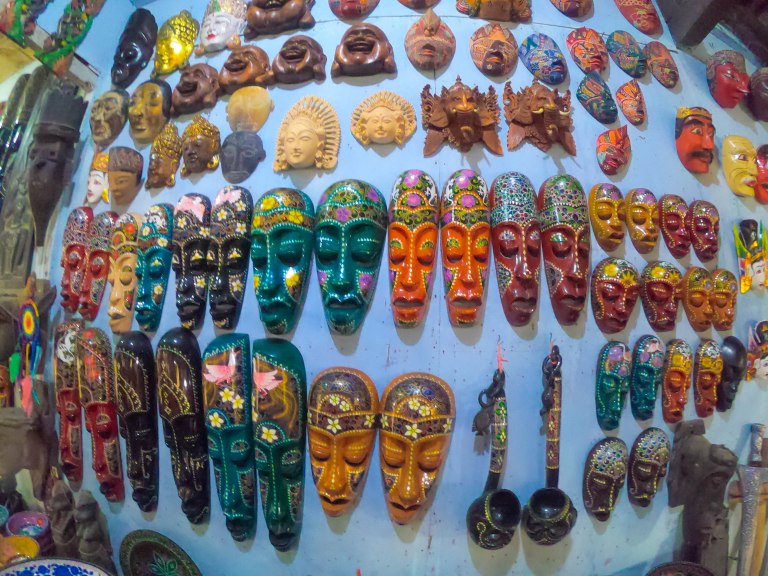 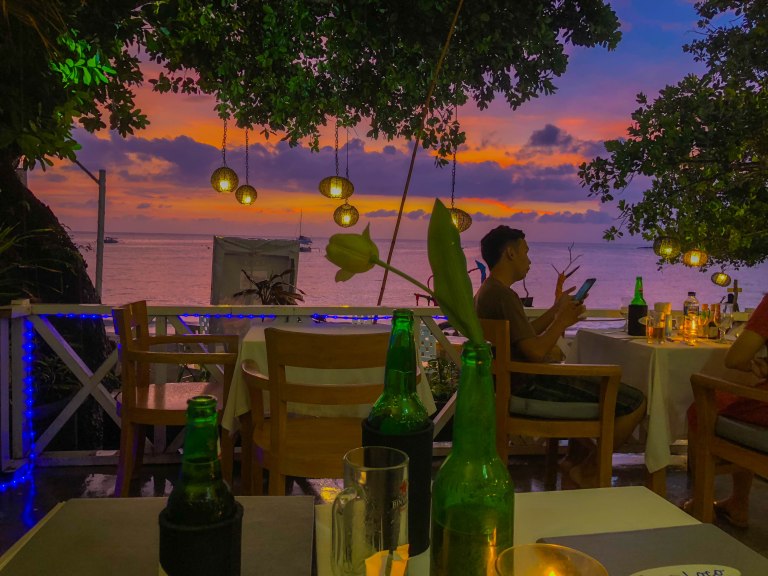 With this we left Senggigi the next day for exploring other places. The next part of our journey in Lombok will be in my upcoming post. Stay tuned.

An adventurer at heart consumed by wanderlust and passionate about untamed places and wildlife. View all posts by zebracrossingtales